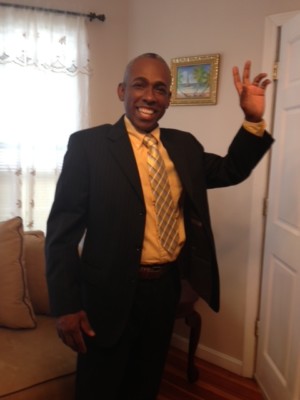 “It’s the best decision I ever made,” says Luis Castillo. He’s speaking about his decision to install a new 22-panel solar photovoltaic system on the roof of his home on Colonial Avenue in Codman Square back in March 2020.

Castillo has owned the triple-decker house since 2014. He lives on the first floor with his wife, son and granddaughter, and rents the second and third floor apartments.

“I didn’t know anything about energy efficiency or solar,” he recalls. “I wasn’t even thinking about it. I was just busy working so hard and paying my bills.”

Then one day in the spring of 2016, Danilo Morales, CSNDC’s Environmental Justice Specialist, approached Mr. Castillo in front of his home, introduced himself, and asked him if he would be interested in learning about some special programs to save energy and money while also helping the environment.

“I said yes, I’m open to do whatever I can do to help,” says Castillo.

Morales had approached Mr. Castillo because his house is in the Talbot Norfolk Triangle (TNT) Eco-Innovation District (EID). This 13-block span of 280 homes in Codman Square is the locus of efforts and resources to create long-lasting change on a neighborhood scale, using sustainability as a focal point.

Morales had just recently started his job at CSNDC when Maridena Rojas, a community organizer for The Boston Project Ministries, one of CSNDC’s partners in the EID work, offered to walk him around the neighborhood and introduce him to some of the residents.

“Because I am Latino and I speak Spanish, one of my goals was to get to know some of the Latino residents and make them aware of opportunities to improve the energy efficiency in their homes,” says Morales. “Maridena pointed me to Luis’ house and said, ‘This is a Latino resident and he’s really nice and engaged and when you ask anything, he’s willing to step up’. One day I saw Luis walking in front of his house, so I introduced myself.”

The first layer of work suggested by CSNDC’s Eco-Innovation Department, under the direction of David Queeley, was to improve the energy efficiency of Mr. Castillo’s home through an energy audit and the installation of insulation in all the walls of the home. The work was done by HomeWorks Energy and the majority of the cost was covered through a rebate from Mass Save.

“Using software that keeps track of utility bills, we were able to measure Luis’s progress in terms of kilowatt and money savings. He already knew it intuitively, but he was able to see clearly that he was saving money and kilowatts. We had developed a good relationship and trust, so I started talking with him about solar,” recalls Morales.

“If I was going to go solar, I wanted to own the system. The staff at CSNDC and Resonant Energy explained to me how I could qualify for a Massachusetts Clean Energy Center (CEC) Solar Loan and that made it possible for me to own the whole array,” recalls Castillo.

He also received a discount on the equipment through the Solar Massachusetts Renewable Target (SMART) Program, offered by the Commonwealth of Massachusetts.

In addition, CSNDC gave Luis a $5,000 recoverable grant or “loan” to assist him with financing the project, which will be forgiven as Luis engages civically in the community. Given his penchant for community service, this will be a win-win for Luis and the community he serves.

The system was installed in March 2020 without a hitch and so far, so good, according to Castillo.

“I can pay the loan with the money I’m saving. And they pay me for the amount I don’t consume. They send me a check for whatever I’ve got left over,” he says. 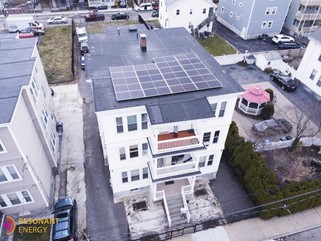 Resonant Energy estimates that Mr. Castillo will save $49,188 over the next 25 years, and that this energy savings represents the equivalent of planting 5,000 trees over that time, in terms of CO2 reduction.

Morales is excited about this success story and hopes he can use it an example for other residents to emulate.

“A lot of people in this neighborhood are hesitant because of scammers,” he says. “We plan to use Luis’ case as an example for others and maybe Luis can become an ambassador for us because the neighbors know and trust him.”

“Some residents have great roof conditions, but they don’t have a good enough credit score to qualify for the loan. It’s challenging because we want to able to help more residents in that way,” says Morales.

But Morales is undaunted. And Mr. Castillo is excited about the prospect of getting other residents on board.

“I tell them I love solar energy because it’s clean energy – and it helped my pocket too,” he says.

Morales has discussed with Mr. Castillo the possibility of electrifying the whole house by shifting his heating from gas to electricity and using induction stoves. Castillo, he says, is excited about this prospect as a next step in his solar journey.